“…suddenly a fight broke out between the bass and cello.

‘I won’t perform if he goes on,’
they both began to bellow.” 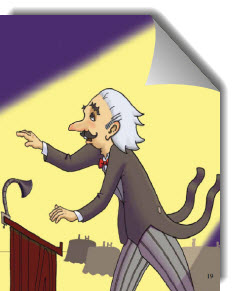 “The conductor called for silence and said,
‘It’s plain to see, unless you learn to get
along there can be no harmony’.”

A Thought for Thanksgiving 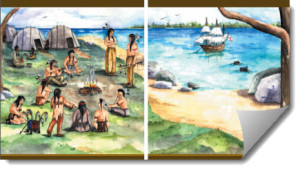 “It was powwow time in Plymouth
when the tribes must all convene
to discuss the new arrival of the pilgrims to the scene.” 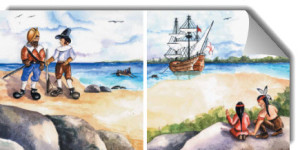 “’I don’t like the way they dress’
said one Algonquin lad.
‘Let’s hope those hats and buckled shoes
Are just a passing fad’.” 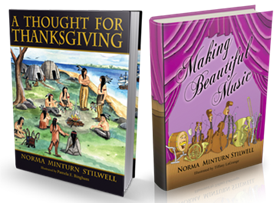 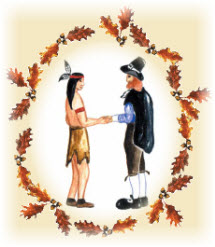 Learning how to get along and to appreciate those who may be different from us are valuable lessons of childhood. If you are wondering how to teach tolerance or looking for a children’s book on diversity, Making Beautiful Music and the seasonal A Thought for Thanksgiving provide an entertaining way to get the message across.

Making Beautiful Music is about an orchestra whose instruments overcome their differences to work together and make beautiful music for the Presidential Ball. Wrapped up in the classic Thanksgiving story for children, A Thought for Thanksgiving helps children look beyond judgments we may have of those with differences. 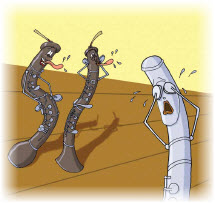 Poet and author Norma Minturn Stilwell believes both books remind us that great things can result when we appreciate the talents and abilities of others and that tolerance is what has made us a great nation.

Large, colorful illustrations and simple verse make them a good choice for beginning readers or for reading to young children. A Thought for Thanksgiving was illustrated by the late Pamela Bingham, and Making Beautiful Music was illustrated by Tiffany LaGrange.